FOUR PAWS recognises the intention set out in this Draft White Paper on the Conservation and Sustainable Use of Biodiversity as hugely progressive and welcomes the South African Government’s intent to transform the current status of conservation, animal welfare and the sustainable use of South Africa’s biodiversity.

The Draft Paper has been open for public consultation since July.

The acknowledgement of animal sentience, animal welfare and well-being, as a signatory to the International World Organization for Animal Health, within this document, indicates a significant step forward in how South Africa views animals. If these concepts are recognized and implemented in legislation effectively, they stand to meaningfully advance the way South Africa treats animals.

However, sustainable use is in direct conflict with animal sentience, animal welfare and the intrinsic value of biodiversity.

The notion of sustainable use contradicts important messages throughout the Draft White Paper that emphasise the intrinsic value of biodiversity and that nature has value in its own right. The recognition of animal sentience, welfare and well-being cannot be achieved if sustainable use of biodiversity allows for captive breeding of big cats for example. South Africa must continue to proceed to phase out the commercial captive lion breeding industry. This is absolutely necessary to sufficiently reflect animal sentience, welfare, well-being and intrinsic value for big cats in South Africa.

The Draft White Paper seemingly allows for captive lion breeding for commercial purposes for conservation benefit or to advance sustainable use. The industry has clear commercial intent: cubs and juveniles are used for petting and photo props, adults are likely to be hunted for trophies or used as breeding stock, before their body parts are shipped elsewhere. There is no conservation benefit as captive animals have no genetic or ecological value, as they are born in captivity and cannot be released into the wild. The industry arose based on the argument for sustainable use and its existence contradicts the recognition of animal sentience and welfare and harms the reputation of South Africa in conservation and eco-tourism, meanwhile wild populations of big cats continue to plummet or keep a worrying levels.

South Africa’s commercial big cat industry extends beyond lions, targeting other big cat species. Tigers are endangered and non-native to South Africa and are intensively bred for a commercial trade in live animals and their parts, contravening agreed upon CITES Decisions and Resolutions. There is also a significant export trade in leopard trophies and trade in captive jaguars and their parts. 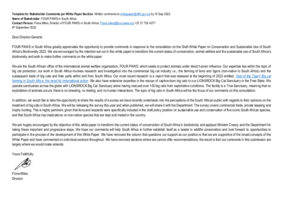 The Life Cycle of Exploitation