FOUR PAWS is committed to animals in need worldwide. Every day we rescue animals from poor living conditions: bears dragged down the street with a ring through their noses, lions languishing on a concrete floor, dogs just minutes away from a gruesome death. In addition, FOUR PAWS has a special "Rapid Response" team; a team equipped to help animals during wars and in conflict zones. Juno van Zon, who works at FELIDA Big Cat Centre as the "Deputy Manager" of the Dutch FOUR PAWS sanctuary, is part of this remarkable team trained to work under the most challenging and risky conditions. In this blog, he talks about his motives and unforgettable experiences.

How it all started

"The way humanity treats animals hurts me. I wanted to do something about this, and in 2014 I started working at FELIDA Big Cat Centre, a project of FOUR PAWS, to be able to care for rescued and traumatized big cats. At one point, FOUR PAWS started working in Thailand after the infamous Tiger Temple was closed by the Thai government and 165 tigers were housed in government facilities.

The already existing Rapid Response team needed someone who had experience in caring for big cats, and so I traveled to Thailand to help. I have always had a passion for animals, nature, traveling and other cultures, so I did not hesitate for a second. This was how I got to know the Rapid Response team, consisting of several international colleagues, and was eventually able to be part of it. At first, I received specialized training, which is still repeated on an annual basis. During the training, we learn how to deal with difficult or even life-threatening situations in conflict areas, how to travel as safely as possible, and what to do and especially what not to do. The training is given by special security experts and ex-military personnel, and thus very intense topics are discussed. But this is necessary because when you travel to a war or conflict zone, you have to be as well prepared as possible."

Within the Rapid Response team, which is always led by Dr. Amir Khalil, everyone has their role. During the missions, I am mainly responsible for the management of the animals. For this, I work closely with Dr. Frank Göritz, a veterinarian from the Leibniz Institute for Zoo and Wildlife Research (IZW) in Berlin, who has been active as 'Chief Veterinarian' within the team for many years. In addition, I often help with technical and logistical work, and we all assist wherever Amir indicates help is needed because we are only with a small team. Over the years, we have all become very familiar with each other. This is important because we sometimes spend weeks together in unsafe conditions, and then it is essential that you can trust each other blindly. We do, however, always remain on guard. Because when you are in conflict areas such as Gaza or Sudan, you never feel entirely safe and you shouldn't. Thanks to our training and the trust in each other, we manage to remain calm but also alert at the same time. I don't think our missions would have been as successful if we had not been as aligned as we are today. The team feels like a strange second family. Even on days when you feel a bit 'off', there is always someone who will help you to put your heart into it again."

Keep the goal in mind

"You face many challenges, related to work and personally. First of all, there is the care for the animals, which are often severely debilitated and suffer in ways you cannot imagine. To get these animals back on their feet is our first priority. And when this happens, it is an enormous logistical challenge to get the animals out of the country where we are. In addition, a hundred things are constantly happening around you, and you must always be alert. Some locals are very happy with our help, but often there is also frustration from residents who do not want us to remove the animals. The missions usually are quite long, and due to the difficult circumstances in which we work, not everything goes according to plan. You have no days off, and you work from early in the mornings to late at night. Every day you see suffering, poverty, and misery. This makes it very hard physically, but especially mentally and yes, then you sometimes miss your comfortable life at home. But giving up is not an option; we always keep our goal in mind."

The dark side of animal abuse

"Despite the difficulties and risks involved, participating in such missions is something I have always dreamed of. Many aspects grab my interest: of course rescuing animals from distressed situations and giving them a good life, but also dealing with and educating people of different cultures, learning from and about these cultures, working together with people with the same goals, and finding sustainable solutions in difficult situations. I also find it important to make people in our 'Western world' aware of the situation in other countries. The Rapid Response missions point out a very dark side of animal abuse, but at the same time we also have to remember how complicated the circumstances are. Other factors, such as war and pure poverty, often play a significant role. Then the animals are not always a priority."

"I have already attended several Rapid Response missions and have also participated in other rescue operations and in the support of FOUR PAWS projects, both within and outside Europe. They are all unique experiences, and you learn new things every time. But there is one mission that I will never forget: the mission in the summer of 2017 when we rescued 13 animals from Magic World, a war-torn zoo near Aleppo, Syria. Countless thoughts flashed through my mind during the transfer of the animals on the Turkish-Syrian border. I saw minefields, heard an explosion, saw young boys getting ready to fight. Of course, you read these things in the newspaper, or you see them on the news. But to experience this in real life was very hard to believe."

"The Syrian animals had a tough time, that was immediately clear. All animals were so scared and emaciated. They had wounds all over. One of the animals, tiger Sultan, was in shock and even suffered cardiac arrest not much later. Fortunately, Frank was able to resuscitate him. In total, this mission lasted five (long) weeks. We took care of the animals in Turkey in the best way we could until they were strong enough for the journey to Al Ma'wa for Nature and Wildlife, a sanctuary in Jordan that is run by FOUR PAWS and the Princess Alia Foundation. An extraordinary moment was when a passenger plane from Turkey to Jordan waited for us for four hours so that we could load all the animals. Then you see that everyone wants to do something good, and sometimes animals in need bring out the best in people."

"Jordan was the final destination for some of the rescued animals, but not for all. The tigers Sultan and Sayeeda were so sick and traumatized, that they needed special care. We were able to offer them this at FELIDA Big Cat Centre, which is why Sultan and Sayeeda came together to the Netherlands in October 2017. For me, this was extra special: I took care of them from the beginning of the mission, right through to the end. Because unfortunately, both tigers were in such bad shape from all the hardships they endured, that they died at a young age of severe and irreversible kidney failure. Nevertheless, I am grateful for the opportunities we were able to offer Sultan and Sayeeda and that they still got to know love, happiness and joy. I will, therefore continue to dedicate myself to animals in need, and I am curious which missions will come my way in the future!"

Update: during the publication of this blog, Juno van Zon is in Pakistan to assist during the rescue of Kaavan, " the loneliest elephant in the world", and the bears Suzie and Bubloo. 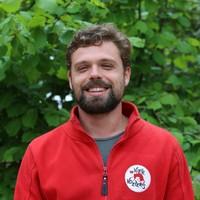 Juno van Zon is the Curator of FELIDA Big Cat Sanctuary and works for FOUR PAWS since November 2014. In addition to working at FELIDA, Juno is also a member of the FOUR PAWS 'Rapid Response team' that is equipped to help animals in the face of wars or conflict zones.

"The fact that we, as an organisation, provide special care to animals in need and at the same time develop new projects for animals in need all the time, gives me the drive to continue this important work."