Our team worked at full speed to provide veterinary checks and transport for the animals. The tight time schedule posed a challenge.

The team was especially worried about tiger Laziz. It was unsure if he would enter his crate without any problems. When animals are in such severely bad conditions, our team tries to avoid anesthetizing them at all costs to limit any health risks to the animal. Luckily, Laziz went into his transport cage with ease, as if he knew he was being brought to a better life.

For Laziz and the rest of the remaining animals, our team transported them across the Gaza border. Even the porcupines, which had gone missing, were relocated and loaded safely.

Porcupines, emu, and the pelican were brought to the New Hope Centre in Jordan. The Centre is part of 'Al Ma’wa for Nature and Wildlife', an organization run jointly by FOUR PAWS and the Princess Alia Foundation.

The five monkeys were transferred to the Primate Sanctuary Foundation in Israel.

Laziz had a longer journey: to the FOUR PAWS LIONSROCK Big Cat Sanctuary in South Africa.

“Laziz remained surprisingly relaxed during the whole transfer and during his release. There was an unintentionally comical moment when he tried to back out of his box. It didn’t really work out, but he finally managed to step out onto the terrain for the first time. He enjoyed taking the time to sniff about and explore his new home.”

Our team members worked at full speed to give all the animals a medical check and load them into the transport crates. The tight time schedule posed a special challenge. And we were worried about whether Laziz would enter his crate without any problems; we definitely wanted to avoid anesthetizing him if not absolutely necessary. But the tiger just went straight into the box as if he knew that we were bringing him to a better home. So many people have closely followed the progress of this mission and shown solidarity with Laziz and the other animals. We are happy that we have been able to finally close down Khan Younis Zoo.

The mission was accompanied by Austrian blogger Madeleine Alizadeh (dariadaria)

Madeleine visited LIONSROCK in 2015 when she accompanied the transfer of six tigers from the FELIDA Big Cat Center in the Netherlands to South Africa. Watch her video for exclusive footage of the Gaza mission.

“I was able to witness how tireless this team works and how important their work is. It wasn’t easy, considering the many struggles we were facing in an area, but everything worked out well.” 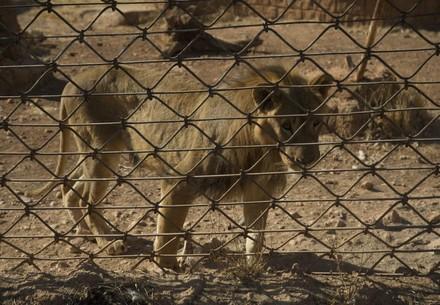 13 animals are given a second chance at life